The National Bureau of Statistics (SNB) revealed this in its latest report on Nigerian capital imports for the four quarters of 2021.

The report examined the value of new investments that poured into the Nigerian economy in 2021.

Of the 24 states, ten have also failed to attract foreign investment in the past three years. 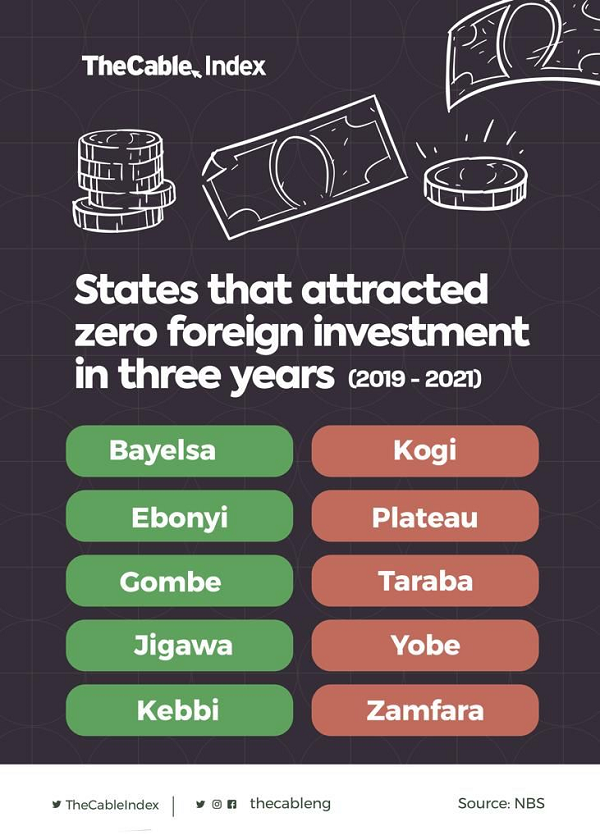 LAGOS REMAINS THE CHOICE OF INVESTORS

Lagos eclipsed other states and the Federal Capital Territory (FCT) topped the list of states that attracted the most investment in 2021.

The commercial city of the country attracted 5.8 billion dollars of investments, which represents 87% of the total inflow of capital in the country for the period under review.

Out of 51 countries that invested in Nigeria, the UK emerged as the top source of capital investment in 2021 with $2.19 billion. 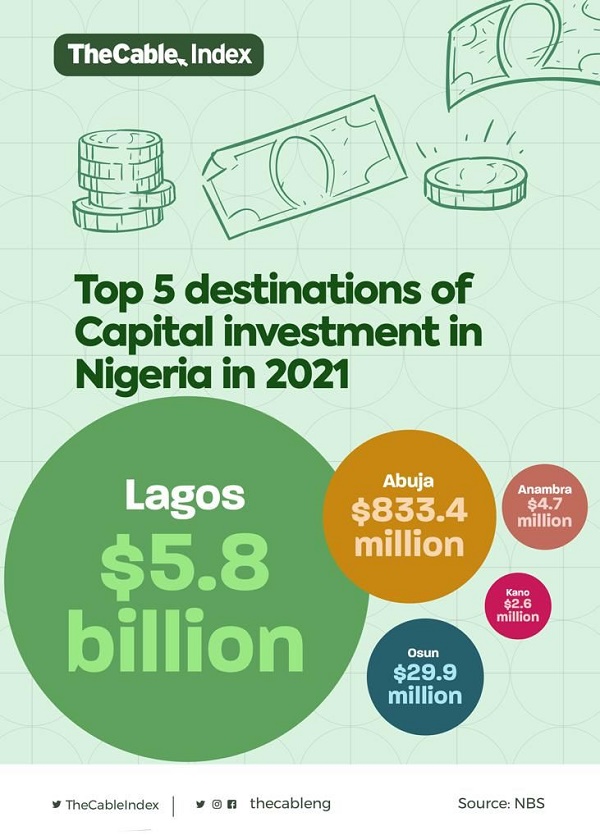 According to the World Bank’s 2020 Doing Business Index, which was the latest report, Nigeria ranked 131st out of 190 economies across the world for running a business, up from 146th the previous year.

Many believe that the government continues to do business on lip service as foreign direct investment has continued to decline, in part due to certain obstacles imposed on foreign companies wishing to invest in Nigeria.

Lai Mohammed, Minister of Information and Culture, Explain that the Presidential Council for the Business Environment (PEBEC) has implemented more than 150 reforms on the ease of doing business.

PEBEC was set up in July 2016 by President Muhammadu Buhari to remove bureaucratic constraints on doing business in Nigeria.

According to Mohammed, as a result of the reforms, Nigeria’s 2018 subnational Doing Business report recorded unprecedented improvement and the World Economic Forum (WEF), in its 2018 Global Competitiveness Report, recognized the business environment. Nigerian business as one of the most enterprising in the world. world and highlighted Nigeria’s improved competitiveness in a conducive business environment.

He noted that the Companies and Allied Matters Act 2020 (CAMA 2020) signed by the President, introduced at least 15 new provisions that promote ease of doing business and reduce regulatory hurdles in Nigeria.

The minister also listed other reforms, including visas on arrival for business people, a reduction in the time required to register a business with the Corporate Affairs Commission (CAC) and the introduction of electronic filing and payment of federal taxes.

Despite these reforms, the country still faces devastating problems such as kidnappings, murders and attacks on government facilities and security infrastructure.

Amid conflict in Ukraine, Russia bans foreign investment out of country

Russia is temporarily suspending the exit of foreign investment from the country, Prime Minister Mikhail Mishustin announced on Tuesday. The move comes in response to the freezing of Russian capital abroad by the US, EU and their allies, RT reported. “We hope that those who have invested in our […]

To print this article, all you need to do is be registered or log in to Mondaq.com. In this document, Deloitte presents a brief overview of the tax and customs advantages applicable to foreign investments in Uzbekistan. Since the tax system in Uzbekistan is subject to frequent changes, we recommend that you use this overview […]